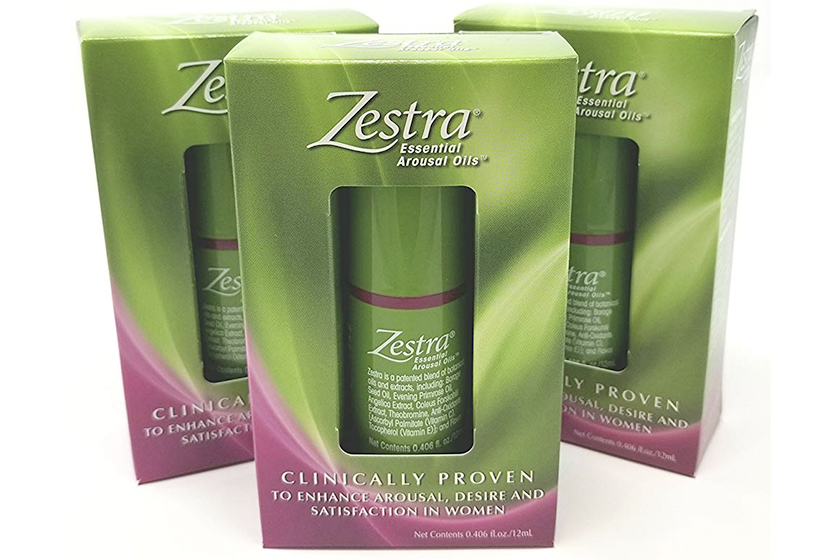 When I first heard of Zestra Essential Arousal Oils I felt a little skeptical. I’ve tried a kajillion of these different types of “arousal” creams and jellies in the past, and I’ve never been terribly impressed. You put it on your netherbelows, wait a few minutes, and BLAMO! You are a raging sex kitten.

That crap has never worked for me. The only thing I’ve ever felt was a little tingling, but nothing more than that–no BLAMO! No sex kitten. However, I was willing to give Zestra a try because it’s a little bit different from the other stuff that’s out there.

It’s even gotten attention from Good Morning America, The View, The New York Times, Tyra, Rachel Ray, and even Dr. Oz, so it must be good!

After doing a little research and reading the ingredients list (Borage Seed oil, Evening Primrose oil, Angelica Extract, Coleus Forskohill Extract, Theobromine, Anti-Oxidants, and flavor) I could tell it was pretty harmless, so I was excited to give it whirl!

We tore open the packet and it immediately started rolling and spilling out. So the first impression was that it is very thin, watery, and silky. For that reason, I think the pump bottle version is probably the best way to go since the packet is a little messy and some of the stuff gets wasted. It does not appear to be dark, but it could potentially leave an oil stain on certain colors of sheets, similar to any oil or silicone based fluid.

Since the packet said it had “flavor” in it, we tasted it. It’s pretty light and non-descript. It almost tastes like wax lips. Kinda sweet and subtle. The scent is light and pleasant and also pretty hard to pin down. It did leave a bit of a tingly sensation on the lips and tongue. 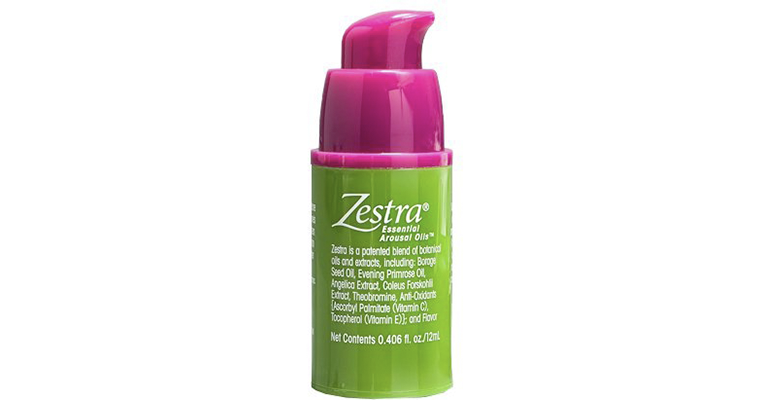 Next, I mashed Zestra into my girl area. My husband has a problem with my use of the word “mash,” so we’ll just say we “gently massaged” it in, but the truth is, I really just mashed it in there because the baby was taking a nap and we had an unpredictable amount of time to get the job done. Also, it had been a while since we had Sexy Time and I was anxious to get the party started.

Mash or not, the stuff started to burn a little bit almost right away. I think the product literature describes it as a “gentle warming”. I’ll leave the final determination up to you, as I’m sure different people will have different sensations. In my case, I’d call it a “burning” rather than a “warming,” but make no mistake – it is a good thing, and it doesn’t hurt at all. It’s a nice kind of burning, but I was a bit underwhelmed. I waited for my “Zestra Rush” to come, but it never did. The clock was ticking, so we started doing our thing anyway and ho-lee-shit!

It wasn’t so much of a rush like all-of-a-sudden, but I could tell right away that it made my clitoris way more sensitive. In fact, I nearly exploded as soon as my husband touched me there. It was amazing! It FELT amazing! Zestra really did increase my sensitivity, which I would describe as low-to-average normally.

Now, it did not turn me into a wanton sex kitten, so I would say that my desire and/or libido was unaffected. That said, it did make sex even more pleasurable than usual and the memory of that will most certainly make me more enthusiastic for the next time. So, in that way, Zestra can potentially help you become more interested in sex because it just plain feels better. It also might have a more systemic effect once it’s been used more often, but I can’t speak to that… yet. Although the product literature states you should apply it five or ten minutes before intercourse, I found the effects to be quite long-lasting, even up to an hour or more, so it’s possible that it could be used as more of an aphrodisiac by applying it earlier than that, to “get the juices flowing.”

From the other side of the table, my husband reported that he felt some “tingly” effects on his dangly bits. Also, he noted that his erection did not seem to subside quite as much during his “recovery” period immediately following–a fact I could corroborate. In fact, he said that he could still “feel something” going on an hour after the first exposure, and that first exposure was only by secondary contact through me. For a while, it even looked like we might have a lot more fun, but sure enough, life butted in in the form of a waking, crying baby and even those most enticing plans had to be scrapped. Maybe next time!